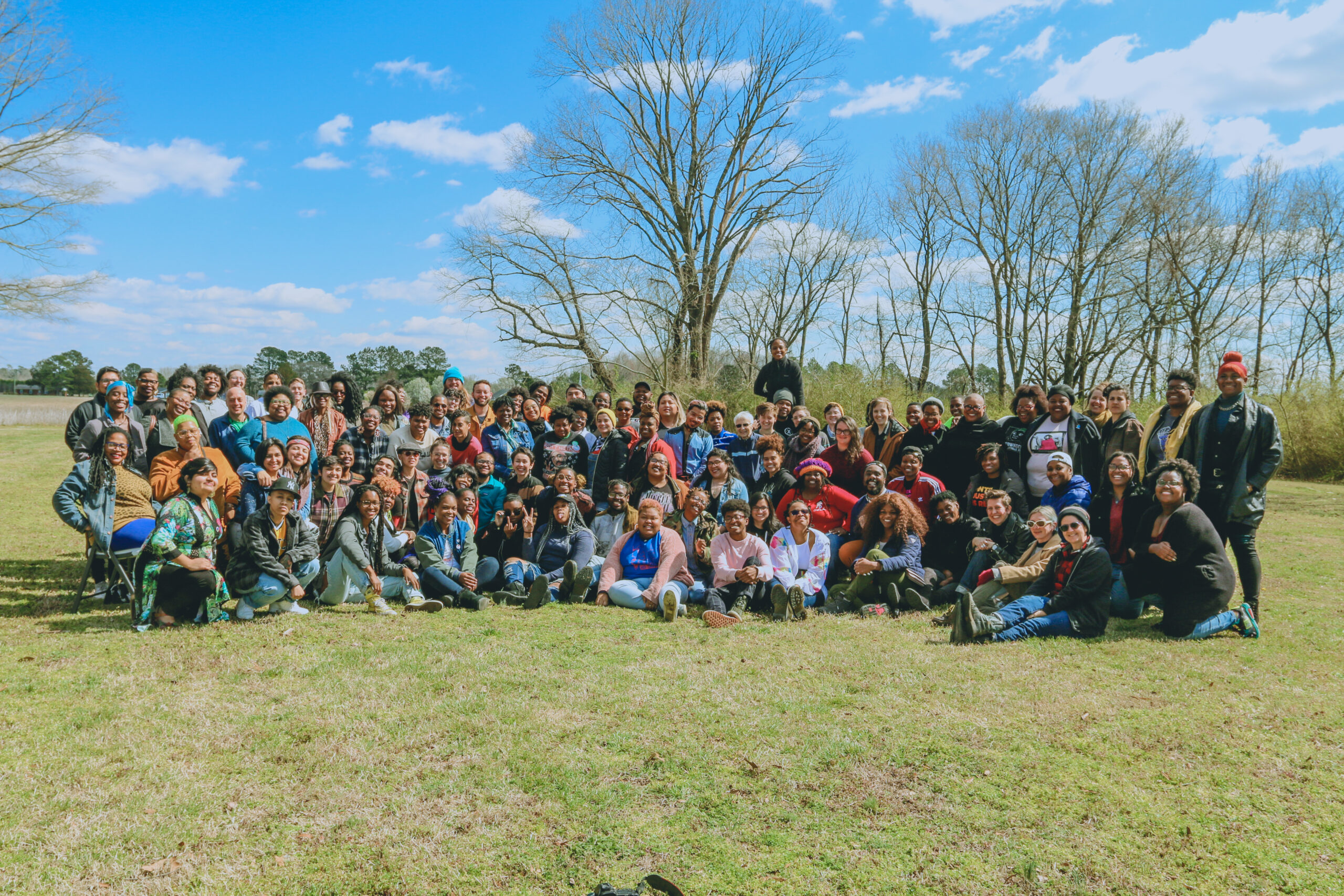 SONG’s fellowship program is an organizing leadership development opportunity for SONG’s Black members and members of color. This year, the fellowship program was lovingly named after our comrade Murph “The Detonator,” to honor their legacy and commitment to SONG and SONG’s vision for liberation. Throughout our 27 years we’ve maintained that creating space for Southern LGBTQ people to enter a political home is critical to our movement’s survival.

At its core, the year-long fellowship program is intended to grow the base-building muscle of the fellow and fortify the lifeblood of the local chapter and/or working group. Join us in welcoming our 2020 base-building and infrastructure fellows!

Daniel is a queer Latinx southern scholar who is so damn tired all the bs and is ready for the dismantling of all oppressive systems. They are one of the base building fellows for ATL(hoe), and is determined to continue to build collective power with folks who are committed to making, what Ruth Wilson Gilmore calls, life-affirming institutions with those who have been deemed disposable by the state. Their mother is from Lima, Peru and their father is of the Puerto Rican diaspora. The phrase “no soy de aqui ni soy de alla” (neither from here nor from there) is a phrase that encompasses their feelings around identity, belonging, and place, and has a deep impact on how they show up in movement. They consider themselves an internationalist because they know that the struggles faced in the South are deeply connected to freedom struggles across the globe.

Daniel is always looking for ways to expand and deepen their analysis of interrelated issues. Their dream role is to be a teacher and healer in movement and loves hosting political education workshops for community members to collectively deepen their understanding of the systems that bind us. In their free time, Daniel loves to shake ass, journal, be in community, and contemplate why Libras are the best.

Rome is our base-building fellow in Nashville, Tennessee, where he was born and raised. According to Rome, “Trans people are my people and I just want us all to be good— period!” Black, trans, and a communist— Rome aspires for unity and liberation but not at the expense of his trans fam.

He believes Black liberation is queer liberation and that trans folx will lead the people’s army into a new era. With SONG being his political home, as fellow, he hopes to bring change in the form of trans-focused work and community, radical abolitionist action, and a communist vision through a transmasculine lens.

Myllasa is a twenty-something southern yankee radical queer for lack of better words. One thing they learned over the past 5 years of experiencing their paternal family’s stomping grounds is that South Carolina is home for all of us and working alongside and organizing with community is more than special. While surviving with their catpup Mixtape, their current focus lies between the intersections of environmental justice and ecological planning. They describe themself as an artivist and groundskeeper but we and everything else are forever evolving.

Marian “Mars” Mwenja is a Black queer aspiring farmer born and raised in Birmingham AL. They held a summer internship with SONG ATL in 2017 where, within a fiercely loving community, they better understood themself and their place in bringing collective liberation into this world. This ache for freedom keeps calling Mars back to SONG and, after four years at school outside Philly,  back home to the South (which, really is where it’s at!). We are still grieving the transition of a comrade to an ancestor in Birmingham, but Marian is excited to honor Murph through building a badass chapter here.

Marian is a lover of tea, of sunshine, and of long, tight hugs (and the sigh of sinking into an especially needed embrace). They strive to be in an ever deeper relationship with nature, learning embodied freedom, resiliency and medicine from the plants+sky+mountains+earth around them.

Marian is a lover of tea, of sunshine, and of long, tight hugs (and the sigh of sinking into an especially needed embrace). They strive to be in an ever deeper relationship with nature, learning embodied freedom, resiliency and medicine from the plants+sky+mountains+earth around them.

Debbie The Artist is a non-binary black-queer-feminist who embodies the power of creative expression as a vehicle for social change. Unapologetic in the pursuit of social justice and  racial equity, Debbie pictures a revolutionary society where folks can exercise their fundamental human rights free from fear. This abolitionist politic shows up in all that Debbie does. When they say, “Art is who and what I am”, what they mean is art is their tool, their medicine, their voice and vision. The songbird hails from Durham, North Carolina where they shake, make, bake, and create. Debbie writes music rooted primarily in the lived experiences of love, loss, magic, and triumph. Identity is at the center of Debbie’s music because of the revelatory process they endured in figuring out who it is that they are and how to bring their most authentic self to light

Like many black and queer impoverished youth, Debbie’s childhood was an arduous one. Growing up with drug addicted parents, it took time for them to separate themselves from their trauma. Debbie was  a first-generation college student who dropped out, became a community organizer, and then  returned to school to graduate with honors from NC A&T.  This tenacity and fearlessness is baked directly into their musical and artistic endeavors. Debbie has learned by every stretch of the imagination, that, when you step out on your own two feet, you have the power to make your dreams come true.

Teddy is SONG’s Regional Arts & Culture fellow and Arts and Culture lead for SONG Nashville. Their fellow position is centered around how we collectively document and tell our stories to be passed on to future generations in an effort to provide answers to the questions they may ask later. They want future generations to be able to answer with accuracy and without doubt, “Who threw the first brick?”

Sun Gabriel is a young organizer willing to do the work for their people. Raised in the east side of Atlanta, Sun was brought up in a home filled with life, song, and community. Like many young Black girls, they also experienced many forms of oppression, subjugated by the judgement of others. Throughout childhood , they navigated living in multiple realities entrenched in hard choices, survival, and their imagination. It was their imagination and love of words that brought them across Zora Neale Hurston’s work “Their Eyes Were Watching God”  and other amazing writer’s like Edwidge Dandicat that politicized them. Through written works,  they were shown that there was another world possible.

Sun was shown that there were people like them in the world who had the same experiences and navigated similar oppressions. Sun was brought up by people who were never meant to survive, but did and while doing so made sure to hold space for care, joy, and laughter. Who are their people? Sun’s people are Black, trans, creative, needy, wanting, emotional, irrational, absurd, demanding, southern, Black some more and wanting for a better world. They believe in being ready and that  they have the blessings of ten thousand ancestors who guide them in their work. Sun strives to follow the legacy of the Black Radical tradition.

Their work is inspired by Walter Rodney and Zora Neale Hurston. Joining SONG in 2019, they were embraced by people with different identities and revolutionary understanding of the world which helped them piece together their own identity and understand all that they face. Now as one of the chosen SONG Atlanta Fellows, the prayer of their work is to be liberated with their people and write to transform minds like others’ work transformed theirs.

Lorie Bryant is a lover of Black folk. Lorie grew up in Charleston, South Carolina where she learned the art of conversation from observing how the elders in her family engaged in conversation. She carries the memories of her family through sharing stories about them and creating her own experiences and relationship with people. She feels a special calling to invite friends and strangers into organizing work by asking questions around how they feel and what they deem as important. Lorie now lives in Nashville, TN where she actively practices how to be closer with her community. She enjoys using her hands to create art work, planting gardens and learning how to play the bass guitar.

Connie is a queer and trans Vietnamese American writer, healer, and organizer who was born in New York and raised in Georgia. Connie started organizing not too long ago, when he interned at AAAJ-Atlanta in 2019 and worked on their #ICEOutofGwinnett campaign. That internship served as a cornerstone for his political education, as they gleaned on how legality and citizenship were both arbitrary concepts to a nation-state founded upon principles of genocide and settler-colonialism. Following that, he worked with 2019 Organizer Academy to develop a holistic curriculum on trans-national and racial efforts against white supremacy. He also joined the Asian American Studies Collective, a group which aims to expand queer, feminist, and decolonial Asian American curriculum to higher education along the east coast. Longing for a political home outside of liberal electoral politics that really prioritized decolonization/abolitionist principles and deep-relationship building, Connie finally found his place with SONG Columbus in 2020.

Connie is also exploring how his writing and healing abilities can be useful for the collective movement for liberation. They believe that our political imagination is very much a major battleground for organizers moving forward, and their goal is to build new worlds that spell out exactly what “thriving” looks like for our people through his writing. Communal dreaming, grieving, and healing is also important to them. In his free time, he likes to play tennis, do yoga, read, make up music in his head, and hang out with Mother Earth.

Kristina is a Black AF Nonbinary Queer Southerner raised in Middle Tennessee. They moved to Knoxville in 2004 to attend the University of Tennessee where they were quickly disillusioned by rampant racism, misogynoir, and classism of the university system. This inspired them to begin deep study of Black Liberation Theology, and what it means to be Black and Queer in america. Their first steps into activism and movement work came through their musical projects (work they continue as a musician to this day): decolonizing music that had been stolen and appropriated by white people. This work blossomed into them working to liberate other Black Queers through arts and activism. They began working with Knoxville’s Black Mama’s Bail Out Action in 2019 and made their way to SONG through that work.

They are the base building and outreach fellow for the Knoxville, TN chapter of SONG. Their passion is the liberation of Queer Black folks, the abolition of white supremacist patriarchal capitalism in all forms, decriminalizing poverty, and uplifting Black and Brown Queer voices. Their fellowship work is focused on bringing together queer folks in East Tennessee to work towards a common goal — justice and liberation for the most marginalized communities. The Knoxville chapter has a strong focus on abolishing money bail, pretrial detention, melting ICE, redefining public safety, and mutual aid.

Toni is excited to be the New Orleans co-fellow for 2020! This fellowship gives her the opportunity to build relationships locally and provides tools to empower SONG kinship in New Orleans.