Free From Fear: From The Community Safety Act to Standard Operating Procedures in Bull City 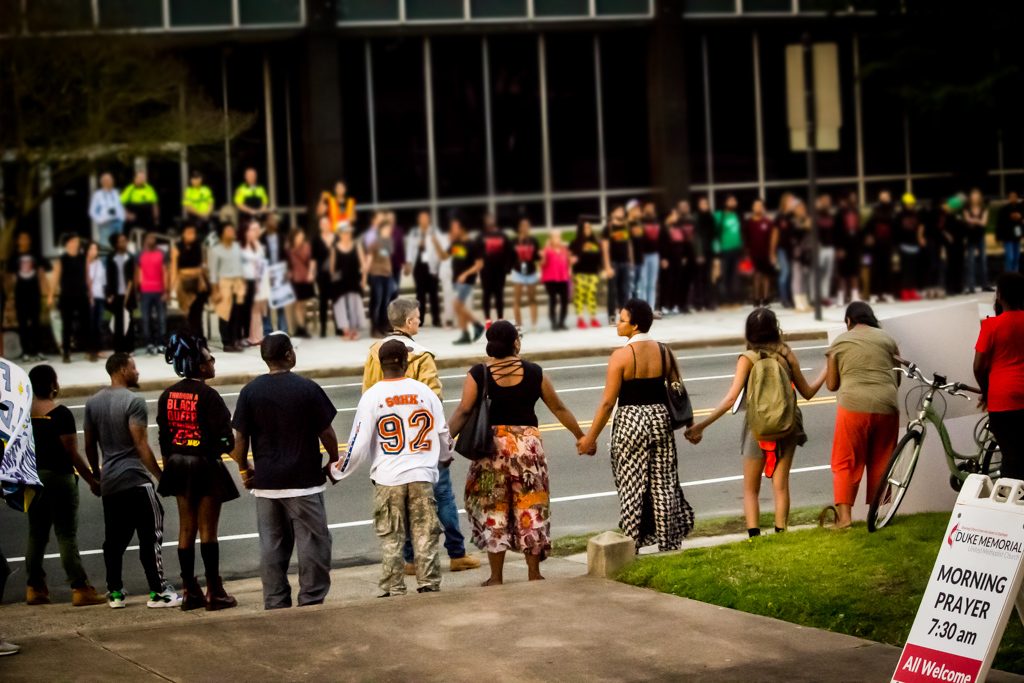 SONG’s first Free From Fear campaign was officially launched in Durham, North Carolina, on January 17, 2015 by SONG members, member leaders and staff. We set out to build local and regional power and capacity in order to make needed political interventions in a time of much urgency and possibility.  By fortifying the skills and spirits of LGBTQ people who are struggling and organizing in our hometowns, downtowns, and countryside, we knew we could begin to shift the conditions and cultural climates of our local communities.

We began where SONG began, in Durham, a place embodying many of the conditions of the broader South, where the resilience and brilliance of LGBTQ people of color and working class folks has taken root in the concrete and is coming up strong.

We saw the campaign as an opportunity to learn about how LGBTQ Southerners living in our hometowns could change the climate and the conversations in our communities about some of the key questions of our time: Who among us deserves safety and sanctuary? How do we reclaim public space and institutions for those of us most oppressed and shut out? What interventions can bring us both immediate concrete change and a long-term vision for liberation? What would it look like if LGBTQ people, Black folks, Brown folks, immigrants, women, working class and poor people could live Free From Fear in the variety of places we call home?  We began by researching local conditions and power-mapping (see power analysis) and by doing outreach and gatherings surveys of over 100 young queer people of color in Durham. The surveys gave us a plethora of first hand information about the experiences of LGBTQ people of color and poor/working class people in Durham with law enforcement and police profiling, and they helped inform the focus and direction of the campaign. We set out to win anti-profiling protections for all people of color and LGBTQ people. We knew that, win or lose, the campaign would yield lessons that would benefit SONG members and sister organizations embarking on similar work across the region.

The core demand for our pilot campaign was the Durham Community Safety Act. We co-wrote this model local policy with input from leaders and grassroots allies across the country who were doing anti-criminalization work that we have found valuable lessons in, including leaders from Prysm, the Get Yr Rights Network, Streetwise and Safe, BreakOut!, and The Solutions Not Punishment Coalition.  Among other reforms, the Community Safety Act called for standard operating procedures for law enforcement interactions with transgender, intersex, and gender non-conforming individuals to seed and create a climate of safety and respect for the rights of these members of our community (Read more about standard operating procedrues and other police department policies here, see page 17). To increase the accountability of law enforcement agencies and officers to the community, the act proposed a Community Safety Review Board that would be comprised of five Durham residents from the African American, Latinx, LGBTQ, and faith-based communities. Under the local policy, these residents would have the power to review and reapportion Public Safety and Police Department budgets towards alternatives like youth recreation and job training programs.

Some of our major successes thus far:

The Durham Free From Fear campaign strategy has since narrowed to drill down on:

The demand for standard operating procedures has regained traction since the passing of HB2 as the local campaign continues to come under the influence of state and national politics surrounding these bills.  We see these moving pieces as interconnected and crucial to challenging the state’s control over our daily lives and self determination. We have assembled a campaign closing crew to win and secure the implementation of the Durham Police Department standard operating procedures. We have challenged the reaccreditation of the Durham Police Department by the Commission for Accreditation of Law Enforcement Agency (CALEA) on the grounds that the department is not responsive to community feedback and that they continue to practice bias-based policing. In order to flank existing leadership and continue to change the climate and conversation in the community we have partnered with a campaign called #DurhamBeyondPolicing, along with a local #sayhername organizing group of Black and brown, mostly queer women, BYP 100, and an union of City of Durham employees, to oppose the building of a new $81 million police headquarters in Durham, and are calling for a city budget that funds Black and Brown futures.

SONG Members can access a glossary of key terms (found in bold in this post) and a break down of local and state government at http://southernersonnewground.org/resources/members-only/