One Rise, One Fall: Organizing, resisting, and grieving for Pulse 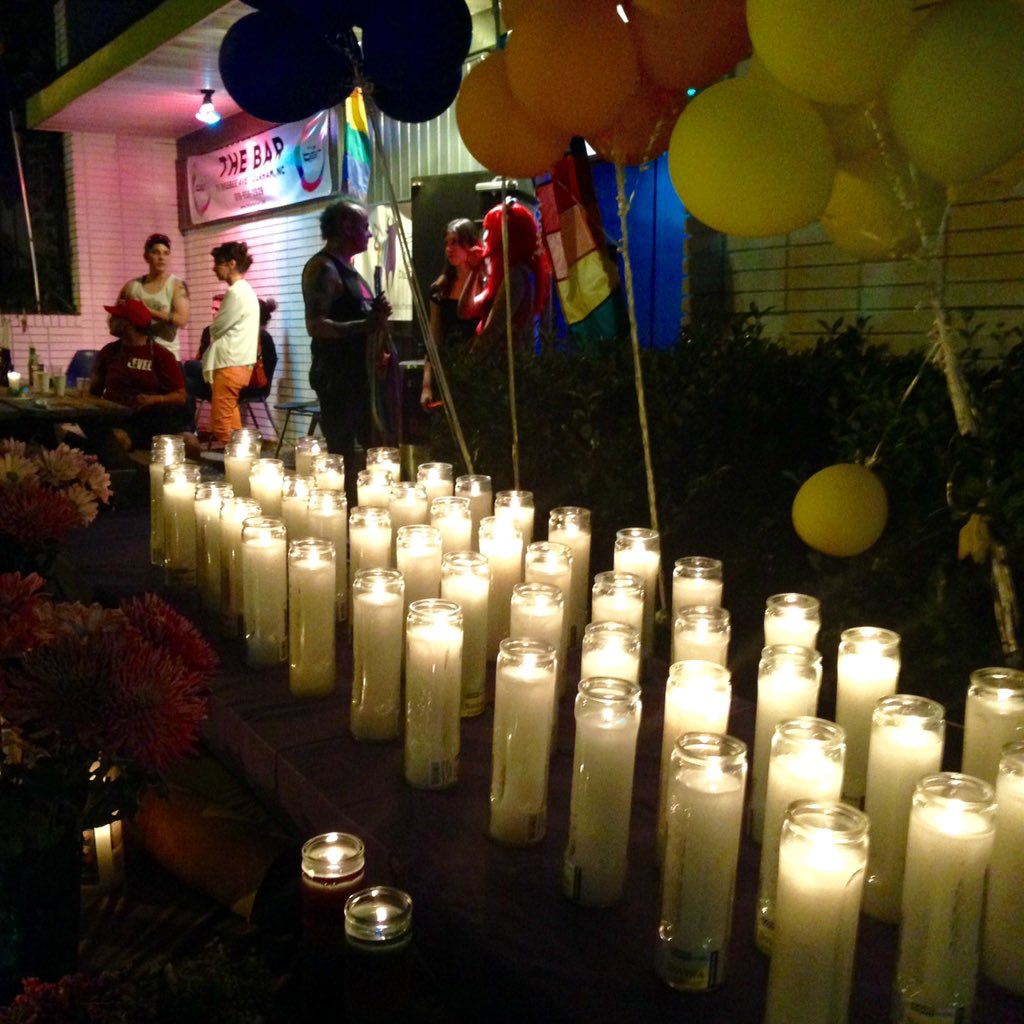 We were closing out the last day of our largest annual membership gathering of the year, SONG Gaycation, when we got the news. Nearly everyone of us slept in a little that morning. We turned over to our long-term lovers, our crushes, our best friends, and we slumbered to the dining hall for breakfast and goodbyes. Nobody remembers who heard the news about the massacre of our LGBTQ kin in a gay bar in Orlando first, but it spread quickly filling us with questions, with sadness, with fury. We glued ourselves to our phones hoping the service was good enough to find out more, to find out if our close friends and family were in that gay bar, to let other people know that we weren’t. We watched the body count rise over the hours. We stared at each other and hugged each other. We rubbed each others backs. We floated around wondering what to do with ourselves in the eerie air. We cried, a lot. We built an altar to hold space for our grieving as best as we could. We remembered the night before many of us were dancing with one another in a dusty old lodge, sharing tales of coming out by the fire, flirting, listening to our elders share stories of coming home to gay bars and the lovers and orgasms they would never forget. Gaycation has always been a place of joy and celebration, one of the many places of sanctuary we’ve created together from the multi-racial, intergenerational kinship network that is SONG. It felt so strange to hold a quote from a SONG board members from the Gaycation tradition of the SONG Legacy Circle from the night before:

But we heard it and we took it as seriously as we took the weight of the moment, so we hit the road to Orlando the morning after the news reached us in the Tennessee mountains to utilize the SONG kinship network we’ve built to fight for our lives in the great tradition of southern organizing.

We came to Orlando, because we believe love, legacy and collective resistance binds us to each other. We came to show up for our LGBTQ Latinx, immigrant, and Black community, both near and far, grappling with the terror of such an intimate assault. We came, because this great loss is happening amidst a growing conservative movement that has demonized us, names us as public enemies in our own hometowns and draws the blueprint for white supremacist, homophobic, and transphobic attacks, violence, and now extermination, many of us have been fighting. We came because we knew we would bear witness to the media getting the story wrong by watering down racialized violence based on gender and sexuality and replacing it with their profit-driven needs for high ratings that rely on inaccurate racialized profiles of Islam and Muslims. We came to help amplify the stories of our people, both the living and the dead, overshadowed by the news when there is consolidation of gay white power. We came because we know that queer people are brave and that we had the the sad yet powerful and precious opportunity to witness a simmering and growing local resistance against the root causes of the Pulse club massacre. We came too to mourn the loss of so many of our own southern LGBTQ Black and Latinx family.

The irony isn’t lost on us that in a place often seen as a fantasy land, such great destruction can happen. We were rudely awakened from our own fantasy of temporary safety and reminded that sometimes there are no words, only fatigue. There is fatigue from the daily violence of the culture wars working against us but there is also a call to action embedded in the great questions of our movement that we are asking ourselves and each other:

What will it take to build a safety many of us have never experienced? What would we need to call on each other instead of the police? What would it take to have saved every person inside of Pulse? How do we hold the cultural and political architects of this oh so deliberate tragedy accountable?

As the national debate pivots back to the presidential elections and political platforms hell bent on building walls on borders and blaming entire religions and Black and people of color around the world for the violence manifested and owned by white supremacy, we will continue to ask ourselves and each other these questions in the coming days, weeks, and months. We will bring our best attempt to learn and flank the people affected by this, including ourselves, at various degrees. We will keep showing up in the South where we are asked to curate joy and to respond when violence strikes. We will come to vigils and we will organize and we will hold the contradictions of both our fear and our courage. We will move with the spirit of thousands of our queer ancestors who have faced these moments and contradictions before and we’ll remember what our elders shared at the SONG Legacy Cirlce

Pat: We can not let ourselves be paralyzed by fear, we’re there too that’s our stand our ground #songgaycay16

3 responses to “One Rise, One Fall: Organizing, resisting, and grieving for Pulse”